Alignment in role-playing games is a parameter that measures the ethics and morals of a character or society within the game. It is applicable to both player characters (PJ) and non-player characters that inhabit the game world (NPC). This alignment is used to be able to play the role of a character and have his actions justified according to his code. It is a simplified form that has been accepted in the role-playing world to make it easier.

On the one hand there is the Moral Axis, constituted by the "good" and the "bad". Those who are neither good nor bad are called "neutral", since their actions follow principles that are neither black nor white, more in shades of gray. On the other hand, there is the ethical axis, composed of Order and Chaos. In role-playing games the term "Legal" is used to refer to "Order" and sometimes "Radical" to refer to "Chaos". Those who have no defined ethics in these cases are also called Neutrals. Briefly:

- Moral philosophy: Describes the character's attitude towards others, and is represented by good and evil. A character of good morality tends to protect the life of the innocent, implies altruism, respect for life and concern for the dignity of other creatures. Loyalty to evil means a willingness to deceive, oppress and kill others; also to degrade or destroy the life of the innocent.

- Ethical philosophy: Describes what a character thinks in relation to the order presented by law and radicalism. A character who opts for a legal ethical philosophy tends to tell the truth, keep his word, and honor traditions. A character with a radical perspective tends to follow his or her instincts and desires, regardless of the side effects they may have on the environment. An example of the latter would be "The ends justify the Means".

- A neutral character does not lean toward either extreme of ethics or morals, with those who are neutral in both aspects being called "True Neutral". 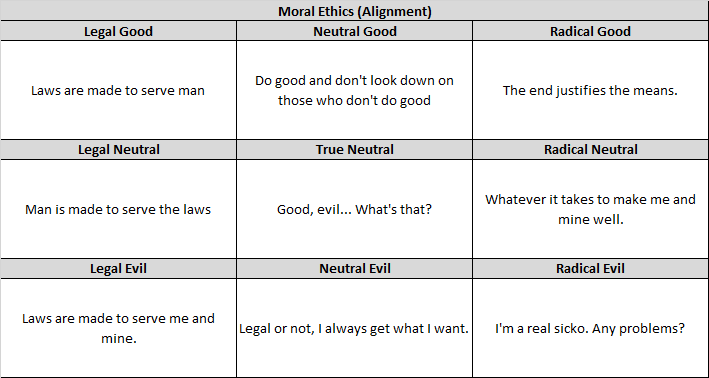