Attempting to make an equivalence of the monetary systems used in fictional worlds in a specific currency (such as € or $) is somewhat unreliable. Currencies do not have a constant value between fantasy worlds. Items are based on weight, purity, and the perfection of their image, so prices are not uniform even when there is similar supply and demand.

The following table shows coins from different fantasy worlds and their equivalence in €. If a Game Master wants, he can design his own monetary system, even using different currencies for his values (copper, silver, gold, platinum, mithril, etc.) or use a single currency. 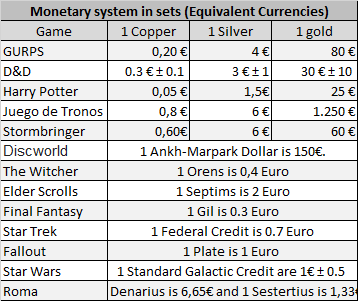 Many times role-playing games and game masters prefer to use a monetary system in decimal system, where each coin of higher value is exactly 10 times greater than the previous coin. (1 gold coin = 10 silver coins = 100 copper coins). This makes it easy to handle in role-playing games and provides an intuitive frame of reference.

Many narrative role-playing games do not give so much prominence to the monetary system, since the economy does not have to play a relevant role in the story. However, it will always be part of the society of the world around the players and allows them to trade in a more familiar way.