Types of Spaceships in Science Fiction

Just as with the way cars are categorized, spacecraft can be divided by sizes, motorizations and by other classifications such as main use, armaments or hull types.  It is important to know that there are many spaceships in science fiction, and that each will have characteristics unique to its author. For example, one of the most famous is the tugboat U.S.C.S.S. Nostromo which first appeared transporting Ellen Ripley in "Alien".  This one has a Yutani T7A NLS Stellar Drive propellant, with Saurn J3000 engine and Rolls Royce N66 thrust tunnels. The complexity of futuristic spacecraft has a very high level of detail in many cases.

Types of spacecraft by size

Perhaps the simplest classification, since it is based solely on the size of the ship. Depending on the authors they will have different limits. One of the most interesting is that of Marc Miller of Traveller, which according to their "metric tons of displacement" are divided into categories. These metric tons correspond to 14 cubic meters, which is the equivalent volume of one ton of liquid hydrogen. This replaces the Ton that we use every day, since this is a measure of gravitational force that is zero in space or variable according to the gravity of the planets, so it is not universal.

1. Small Spaceships: These are spacecraft up to 100 Tm, with shuttles being the most common. This includes lifeboats, space rafts, light shuttles and other equivalent transport ships. They do not usually have jump engines (so they do not usually travel at light speed, although there are exceptions such as Star Wars ships) and their main purpose is to move between planets or ships in the same system. Starfighters and patrol ships are also included among the small ships. Drones are also included in this category.

Examples: TIE fighter from Star Wars or the Baxial from Star Trek.

2. Medium Spaceships: There are two types: system ships and spacecraft. The first ones are spacecraft without jump capability (same as the small ones) but with more than 100 Tm. These are very common as local spacecraft, either to defend planets or to transport goods/passengers in the same solar system. This is because, lacking jump engines, this space is used to carry more weapons or cargo capacity. Spacecraft are spacecraft with jump engines (superliminal engines) with more than 100 Tm. These ships are the most common in science fiction.

Examples: Odyssey from Star Trek or the H-type Nubian Yacht in which Amidala and Skywalker traveled in Star Wars.

3. Large Spaceships: Any spacecraft with more than 5000 Tm is considered a "Capital Ship". These spacecraft can range from Battlecruisers to Carriers or Motherships. Some are even as big as planets, housing hangars with other spacecraft inside.

Examples: Harvester Mothership from Independence Day or the Death Star from Star Wars.

Types of spacecraft according to their engines

There are two very important parties involved to differentiate: Engines and Thrusters; and Power Plants and Reactors. Engines can be maneuvering or jump engines. In short, maneuvering engines are those that allow the spacecraft to stabilize in space, dock in docks and move at speeds below light (Sublight). They are usually driven by gravitational technologies. Jump engines are those that allow the ship to reach speeds greater than light (superliminal). Ships usually have one of each. These engines require a source of energy supply, which sustains both the engines and the basic systems of the ship. This energy comes from the reactors that use different sources to satisfy the main needs. In another RoleGenerator post you can find out more about this.

1. Generational Ships: Colonial ships created in the early space stages of a species, where travel has speeds slower than light and it takes a long time to reach other stars. Their crew will be born, live and die on the journey, whose offspring continue to pilot the ship until they reach their destination. These ships hope to reach other stars intact and found colonies.

2. Cold ships: Slow ships created to travel the stars in a time before the discovery of superluminal engines. Unlike generational ships, these ships have cryogenic passengers and leave navigation in the hands of the ship's artificial intelligence that decides the course to follow to their destination. Their whereabouts are unknown and it is doubtful that they will be able to achieve their goal through orbits.

Example: The ship Avalon from the movie Passengers.

3. Organic ships: It is a gigantic mass of flesh capable of traveling through space. These beings are capable of harboring other life forms inside, serving as ships or forming symbiotic relationships. They are subluminal slow ships without engines, moving through space by their own gravitational momentum, "sailing" through space, sometimes drifting like jellyfish and sometimes consciously like birds.

4. Symbiotic Ships and Living Metal Ships: Symbiont ships are biological artifacts that link living beings: hosts, parasites and symbionts to each other, and are sensitive to jump portals. They can navigate through space-time and are not made of metal, but of organic material and exoskeletons. The living metal ships are a high-tech artificial analogy that mixes metal with microscopic living beings that act as symbiotes. This allows them to self-regenerate like organic matter while giving access to electronic components, allowing replication of effects such as laser deflectors, which organically alone will not be possible. Symbiote ships do not have engines, but cells sensitive to space-time anomalies, while metal-living ships do.

5. System ships: They are futuristic ships but without jump capability, mounting subluminal engines. By saving the space of power plants and hyperspace engines, these ships have great capacity to transport passengers or goods between nearby planets. They are also used as planetary defense ships, carrying much more armament than usual in their tonnage. They tend to be mostly commercial platforms, fuel stations, production plants or observation stations, since investing in ships that cannot travel to other galaxies ends up limiting their usefulness to local areas (solar systems).

Examples: Battle school from the Ender saga of books.

6. Spacecraft: They are medium to large ships with jump capability or ultraluminal engines. These ships also usually have conventional thrusters for maneuvering when they are not traveling through hyperspace. They are the most common for all kinds of uses: recreation, transport, piracy, couriers, etc. The technology with which they reach light speed or higher depends on the author and there are many types: Jump, Warp, Warp, Fold, Disform, Luminic, Bridge or the most popular, the Hyperdrive Engines, which are the ones used in Star Wars.

Types of spacecraft according to their use

This category is the simplest of all and tends to be homogeneous in generic Science Fiction. On the one hand, there are the Military Ships and on the other the Civil Ships. Military ships have strong defenses, armament and sensors for warfare; on the other hand, civilian ships can also be armed, but they are not prepared for battles but as a deterrent against criminals. The most common ships are civilian, as this category includes space freighters, shuttles and pleasure yachts.

1. Military Ships: In all space science fiction movies, at some point, specialized combat ships will appear. This is a very frequent topic that brings a new dimension to the story. These are spacecraft for war purposes, either to provide support to forces within the tactical framework or to provide means of reconnaissance, surveillance, rescue and control to a planet. They mount powerful computers, battle sensors, armor and energy shields, specialized weaponry and state-of-the-art engines. Unless they are light combat fighters, they all have jump-capable engines.

2. Civilian Ships: They are mostly trade freighters, transport shuttles or interstellar yachts. In the movies they are almost all exploration ships in which the protagonists reach their destination, as in the movie Interstellar the Endurance or the Hermes Spacecraft from the movie The Martian. These ships have cabins, leisure areas and basic sensors for navigation in space. 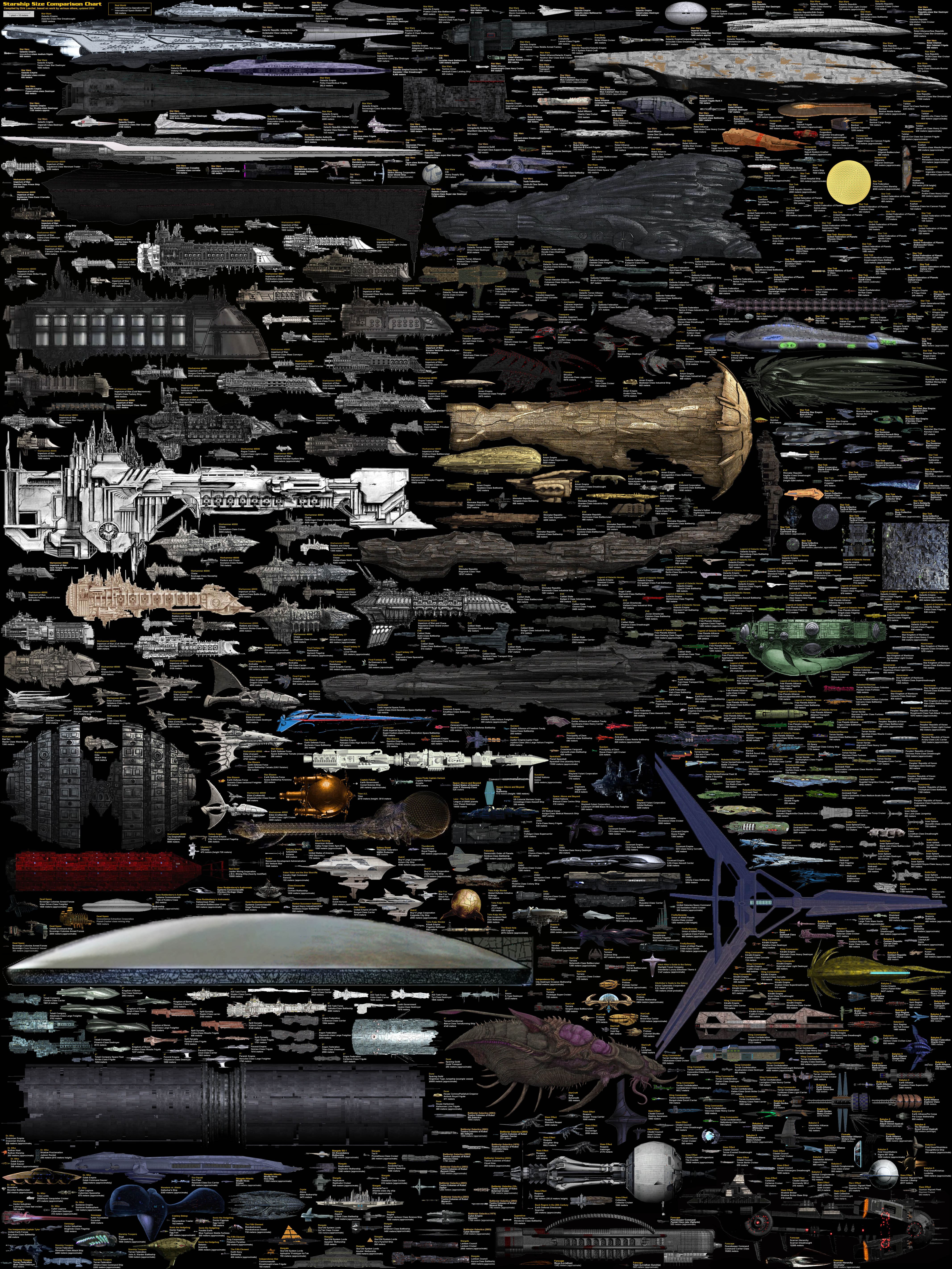